The CS Pathways team presented at two sessions at the annual Massachusetts STEM Summit, held at the DCU Center in Worcester, MA on November 1, 2016.

Fred Martin joined researchers from two other ITEST projects in a session entitled Building Middle School Engagement in Math and Computer Science: Findings from the NSF ITEST Program. The session was organized by Bernadette Sibuma, a research associate at the STEM Learning and Research Center (STELAR) at Education Development Center, Inc. Fred’s presentation slides are available at bit.ly/cspathways-stelar-mastem16. This session was attended by approximately 50 people.

Later in the day, Fred Martin, Molly Laden, Akira Kamiya, and Diane Schilder jointly gave a whole session presentation, CS Pathways: A Model of Inclusive Middle School Computing for Social Good. The session was well-received by a smaller group of 15 people. Slides are available at bit.ly/cspathways-mastem16. 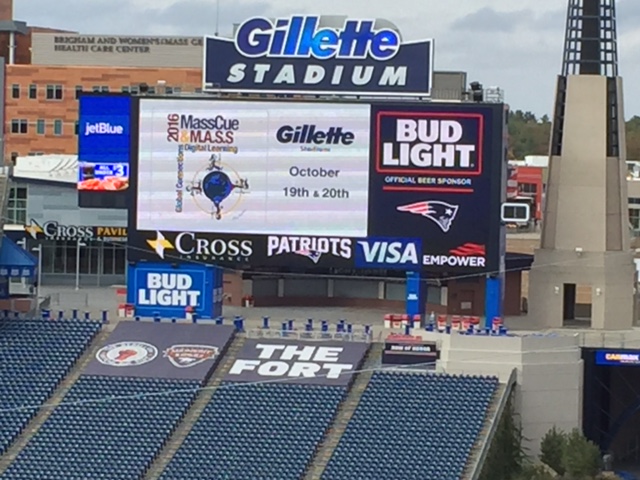 The session traced the project’s trajectory from professional development to implementation as CS Pathways enters its third year.

About a dozen teachers attended, all of whom were planning computer science instruction using MIT App Inventor.

The team presented the curriculum developed by CS Pathways teachers and gave an introduction to App Inventor programming. Teachers interacted with apps developed by project students, including the Cheese Around the World app, the Motivational App, and the Everett Landmarks app.

Materials from the presentation, including the slide show and sample curricula for 6th and 8th grades, may be downloaded from bit.ly/cspathways-masscue2016.

Thirteen middle school students completed the CS Pathways app design camp held at Everett High School from July 11 through July 15. The camp was based on the use of MIT App Inventor, a blocks-based programming system for creating apps for Android tablets and phones.

The students were joined by two community partners:

Ms. Matarazzo spoke about how she works with kids and adults to set goals and help them keep track of their progress in becoming more health conscious.

Ms. Schuler described her work helping a local wild species called the Blanding Turtle, once widely seen in Eastern Massachusetts, make a recovery. This turtle recently has seen its numbers decline as local wetlands are taken away by development.

The students then worked in pairs to brainstorm ideas and develop apps to assist with these missions. This year, campers used AppVis, a new technology developed by UMass Lowell which allows App Inventor users to publish data to the web-based iSENSE database.

By the end of the week, the students had developed eight apps, which are now published in the Google Play app store. The students developed six healthy-eating apps and two turtle conservation apps, including:

At the end of the week, the community partners returned to see the students’ work. Ms. Matarazzo remarked, “I was so fascinated by how innovative the kids were in creating the apps that met our specific needs. Their excitement and enthusiasm for not only building their app but also their interest in thinking about health and fitness was so inspiring.”

All students who participated in the camp week published an app in the Google Play store. Their apps can be downloaded from the Middle School Pathways in Computer Science Google Play developer storefront.

The camp was conducted as part of the Middle School Pathways in Computer Science project, a collaboration among the school districts of Everett and Medford and the University of Massachusetts Lowell. The goal of the project is to institutionalize computer science instruction in the middle school curricula of the two districts.

The project is supported by a three-year grant from the National Science Foundation. 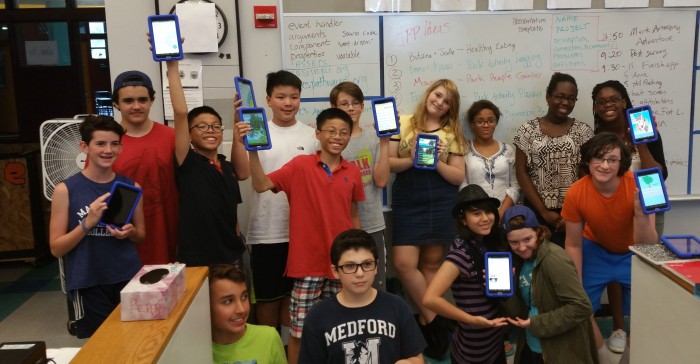 The students developed ten Android apps that were published in the Google Play store.

The apps addressed a range of themes connecting with our community partners, including:

All students who participated in the camp week published an app in the Google Play store. Their apps can be viewed at the Middle School Pathways in Computer Science Google Play developer storefront.

The Medford camps have kicked off with a resounding success!

4 instructors, and 19 campers arrived at the McGlynn Middle School, this week to start learning and exploring about making apps that run on Android mobile devices.

Our concept is to make learning computer science more fun and accessible. And based on the attentive work and very often smiling faces, I would say that we all have been doing an OK job! 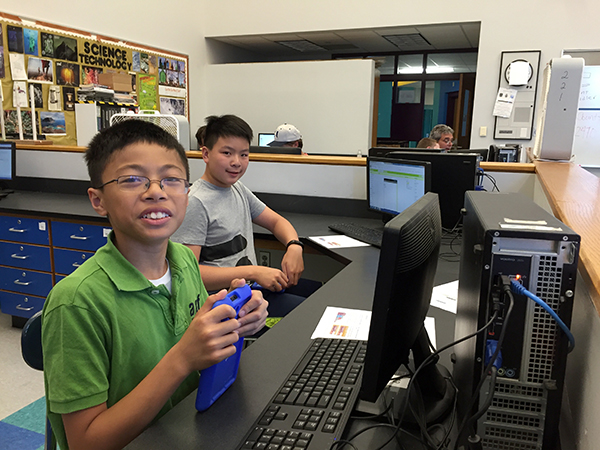 Then we got the kids jumping (literally!). Using an App Inventor component that measures acceleration, campers made apps that recorded the number of times they jump while holding their tablet. After everyone was done, we had a 10 second Jump Off Contest. One pair of campers managed to jump 29 times in 10 seconds, incredible! The average camper pair jumped 26 times. Fred Martin remarked that when he did this with older programmers they got an average of 10! So these kids have energy!

Campers were also shown how to send this information on their jump sessions to a single online database from which the whole camp could see each other’s data. This is called “crowd sourcing,” and from it we could quickly see how others did with their jumps! Campers will be able to use this ability to make apps that collect data from out in the community for others to analyze and maybe even make decisions that can affect the community in some beneficial way!

A busy day, right? But there was more! A key critical part of this camp is encourage community connections. Not only does it feel good to have campers work with community members, but research shows that kids get more engaged if the work they do relates to the real world.

So in the afternoon on the first day, we invited three exciting community partners. Alicia Hunt came from Medford’s Department of Energy and Environment. She talked about the City’s work with the windmill and also the City’s work helping to preserve the environment. Our second partner was Shanasia Sylman from the Mystic River Watershed Conservation Association. She talked about how in Medford they were concerned with making sure there was ample green space around and near the river in which people could recreate and walk around. Lastly, we had Syrah McGivern, also from the City of Medford, speak about her work with Team Medford, which focuses on making sure all Medford residents have opportunity and access to healthy food and places to exercise.

Shanasia talks with the campers about the Mystic Watershed Conservation Association

After they presented, everyone gathered around and we discussed ways we could use our skills in making apps so that we could help these organizations with their work in the community. The rest of the week will be devoted to making a final app that they can present back to the community partners and maybe even have the app uploaded to the Google Play Store for all to use!

We’ll keep you posted on our progress!

Akira Kamiya produced this video to highlight our project for the NSF “Advancing STEM Learning for All” 2016 Video Showcase. Enjoy!

As described by Akira Kamiya, project teacher learning center directory, Farzeen discussed “her experience as a woman of color, and the students were completely engaged, asking questions for almost 20 minutes after her presentation was over! I especially liked the fact that it was mostly the girls of color in the class that were doing most of the talking.”

Ms. Bell added, “Farzeen was amazing! The kids were so engaged the whole class and they were making connections between their interests and potential futures in computer science.”