As described by Akira Kamiya, project teacher learning center directory, Farzeen discussed “her experience as a woman of color, and the students were completely engaged, asking questions for almost 20 minutes after her presentation was over! I especially liked the fact that it was mostly the girls of color in the class that were doing most of the talking.”

Ms. Bell added, “Farzeen was amazing! The kids were so engaged the whole class and they were making connections between their interests and potential futures in computer science.” 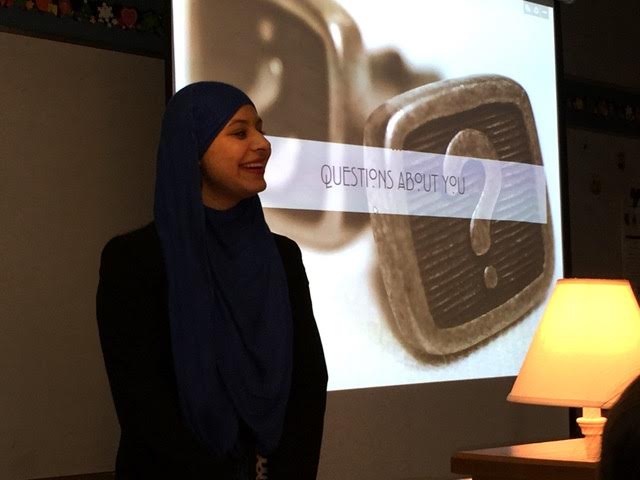 The session immediately followed the opening keynote, and more than 40 conference-goers attended.

The presentation was organized by Akira Kamiya, who led the session itself. Molly Laden, Fred Martin, and Everett teachers Denise Salemi and Dawn Munro also contributed.

The session covered the goals of the project, provided an overview of the curriculum, and offered live demos of student work from Ms. Salemi’s and Ms. Munro’s spring 2015 classes.

A copy of the presentation slides and other handouts from the session are available.

With a picture of Mark Sherman with three project students: 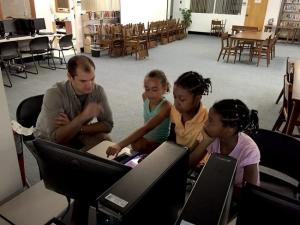 The camps were held July 6 through 10, at Medford High School and Everett High School.

Akira Kamiya, the project’s Teacher Learning Center Director, made sure all of our technology worked as smoothly as possible.

The Everett Independent published a lovely article about the kids’ work.

Edwin Aguirre, our science and engineering writer at UMass Lowell, published a news article about the Pathways in Computer Science project. He talked to Debbie Corlato about her planned work have her kids create apps that address the problem of bullying.

Azita, at Andrews Middle School in Medford, is nearing the end of her Middle School Pathways curriculum. Students yesterday did their usual free-typing exercise for the first five minutes of class, then they either continued with a tutorial of their choice (one with a similar functionality to their own intended app) or, just jumped into programming their app itself. Azita typically projects the day’s agenda onto the whiteboard: 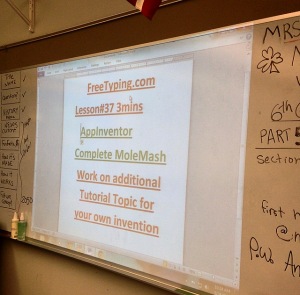 Her students – using the pair programming approach – are at varying stages of producing their final apps. One team is working on a game where the user can help elderly people cross the street. Here is their app layout so far: 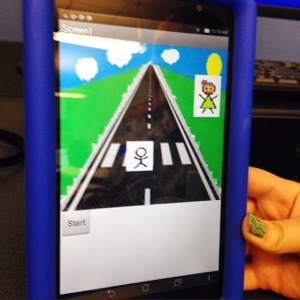 And here is the beginning of their code: 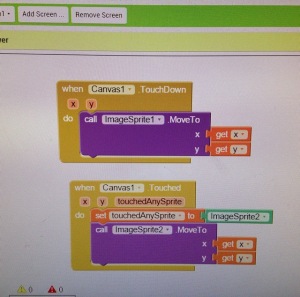 Another is working on an extension of the Digital Doodle app, where you can import a picture of your friend’s face, trace over it, and then remove the picture to reveal a Picasso-esque drawing. It’s like a drawing-helper app. Maybe we will see some similar things come out of Debbie’s art/technology classes over at McGlynn Middle School.

Another team found an image from an amusing potato meme online, and used it to test out loading pictures into components. This evolved into an idea for a fitness app, where the user’s avatar begins as a “couch potato” and turns into a stalk of asparagus once they finish their workout. 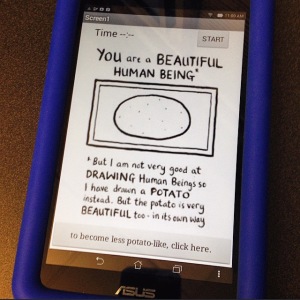 The user will click a button, which triggers a text-to-speech function that gives an instruction to start walking. Then it sets a timer to count down the seconds, and ultimately change the potato image into an asparagus image.

“Okay, to de-potato-fye yourself please start walking at a moderate pace for 10 minutes.”

The pair can’t stop giggling! While they are having fun with the sometimes unexpected path of their creative process, their main focus is getting the timer function to work. Here is their code so far: 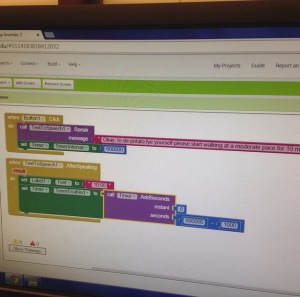 The MSP curriculum with Azita’s class has certainly flown by! Other students are excited to incorporate the tablets’ GPS functionality into their apps. Stay tuned – more to come.

Mike is about two-thirds finished with the curriculum for his two eighth grade classes at McGlynn Middle School in Medford.

On today’s agenda, the students continued to develop their programming skills with tutorial apps, and also brainstormed ideas for developing their own, unique ones.

I. Finishing up the tutorial apps

The students have been working on different tutorial apps at different paces.

One pair worked on extending “Two Things,” an app that features a picture of an elephant and a picture of a monkey, plus buttons to play their corresponding animal noises. This app requires one sound to pause when another one starts playing – a slightly more complex feature than introductory text-to-speech apps, which play sounds all the way through.

At first, the students struggled with the idea of nesting one logic statement within another in order to detect state – and how, exactly, these statements get ordered. We decided that sometimes, it helps to say the logic out loud in English before trying to fit the blocks together on the fly. The students nearly had this code block working (changing the if-statement to an if-else statement)… when the bell rang! 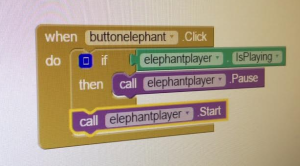 Another pair had extended their Digital Doodle app to include more colors: 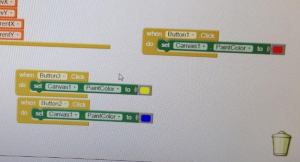 Excited to get things bouncing around the screen, they moved on to the Mini Golf tutorial. Another pair had similar excitement with the Space Invaders tutorial – but kept getting frustrated by red triangles, which indicate errors in the code. We talked about the importance of resolving bugs as you go, instead of letting them accumulate. 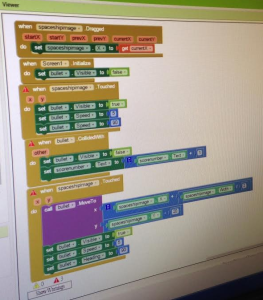 The other part of Mike’s lesson was to get the students thinking about the meaning behind their Martin Luther King app tutorial. What sorts of apps could they create that would be meaningful and helpful to their own communities? Students wrote their ideas on the board over the course of the classes. 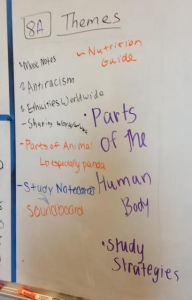 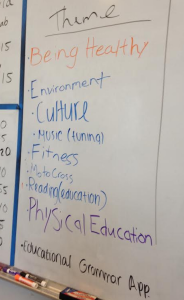 Most of these ideas related to their own interests and hobbies:

Next class, the students will vote on which ideas they like best, and will begin developing their own unique apps.

But sometimes “best practices” distract novices from what they really need to understand.

But the tutorial obscures these ideas by forcing you to learn other stuff:

Subprocedures. The code to move the mole around is put into a subprocedure.

Positioning the mole by querying the canvas for its dimensions, constructing them as a ratio, and scaling it to the full canvas size by multiplying by the “random fraction” primitive. Seriously? I can barely understand this.

Concatenating label text with a numerical value. The approach for keeping score uses both a label to hold the word “Score” and a global for keeping track of the score number. Then, to update the score, the label “Score” plus the number value are concatenated.

With this simplified MoleMash, the entire code is this:

This is far, far simpler than the MIT code.

Notice that the bounds of the random X and Y coordinates are 1 to 100. These are the default parameters of the “random integer” block when you pull it out of the palette.

This means that the mole will only jump about in the upper left corner of the canvas. That’s fine! Kids can figure out on their own how to expand the range.

For beginners, it’s better to use concrete values than abstract functions.

Azita is a technology teacher at the Andrews Middle School in Medford. This is her computer classroom:

Kim, Akira and I visited with her today as she was introducing the MIT MoleMash tutorial to her students. They had previously worked on the MIT Paintpot tutorial.

Most of her students already had PaintPot working. Azita encouraged them to move on to MoleMash—if they needed to go back to PaintPot later, they could do that.

As with all of the other project classrooms, students were working in pairs.

The students had already been introduced to the Canvas in PaintPot. MoleMash introduced several new concepts—a sprite component inside the canvas, a clock component (which triggers the mole’s movements), and random numbers.

All four of us went around and worked with the students in small groups. Most of them were able to construct the interface elements for MoleMash. When I had the opportunity, I described the clock and random movement code to students directly, rather than having them copy it out of the tutorial.

I worked with two students in particular, Jamal and Raul, who were delighted when they got the mole jumping around! Then I encouraged them to explain their code to other students.

Mike is an engineering teacher, so his kids work in a spacious lab with lots of work areas, not just computers:

This was Mike’s 7th day into the Pathways in CS curriculum. Some of his students continued work on their versions of the MIT TalkToMe demonstration text-to-speech app, while others began the MIT Digital Doodle app. Like the other project classrooms, students were working in pairs, and midway through the class period, Mike asked them to “switch drivers” so that all students had mouse/keyboard time.

Some of his students were taking TalkToMe in fun directions. One pair of girls was working on “virtual boyfriend” app. When you pressed the button on the screen, the app would tell you a story in a deep British accent.

Another group was working on a Fortune Teller. Using App Inventor’s random number generator, the app would answer “Yes” or “No” to the question you typed in. Their code looked like this:

The kid named Simon had keyed in the question—“Simon is awesome.” At first, their number range was from 1 to 50, so the app was mostly saying “No.” I encouraged them to think about how likely it was to say yes or no. At first they thought it was just random—or equally likely—but then the realized they were getting lots more No’s then Yes’s, and changed the range from 1 to 25. (The threshold between No and Yes is the length of the question-string. I had previously helped them with the length block.)

After class, Mike showed me his 15-session lesson plan for the project. He is taking notes after each session as to what’s actually been accomplished each day. Here’s the plan: 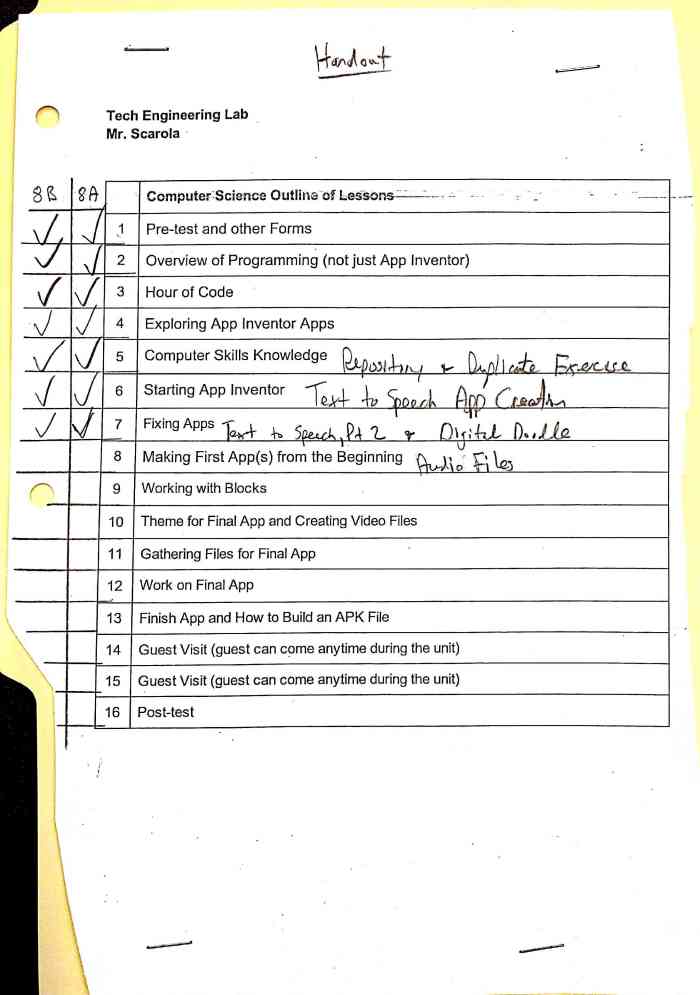 In the next class, he’ll be helping student learn about audio files, and getting them thinking about their final apps.